What would you do if your sister disappeared without a trace? Sister is the Sunday Times and New York Times bestselling debut novel by Rosamund Lupton. It has been translated into over thirty languages and was the fastest-selling debut of 2010 by a British author, a BBC Radio 4 Book at Bedtime and was winner of the Richard and Judy Best Debut Novel of 2011 Award and the Strand Magazine Critics First Novel Award.

When Beatrice gets a frantic call in the middle of Sunday lunch to say that her younger sister, Tess, is missing, she boards the first flight home to London. But as she learns about the circumstances surrounding her sister’s disappearance, she is stunned to discover how little she actually knows of her sister’s life – and unprepared for the terrifying truths she must now face.

The police, Beatrice’s fiance and even their mother accept they have lost Tess but Beatrice refuses to give up on her. So she embarks on a dangerous journey to discover the truth, no matter the cost.

Lupton enters the highly charged ring where the best psychological detective writers spar, her hands raised in a victory clench . . . Like Kate Atkinson, Patricia Highsmith and Ruth Rendell.'
New York Times
A remarkable piece of work. Lupton shrewdly and compassionately peels back the story’s rich layers.’
The Seattle Times
This fast-paced, absurdly entertaining novel, Lupton’s first, unfolds in the form of a long letter from Beatrice to her adored (if sometimes patronized) younger sister. Along with a juicy mystery, it resounds with an authentic sense of sisterly love and loyalty.’
Boston Globe
Gripping.'
O, The Oprah magazine
Taut and tingling.'
Good Housekeeping
After establishing its absorbing premise, Sister becomes a pulse-quickening cocktail of science fiction and whodunit, with a splash of literary poetics and poignancy.'
NPR.org
A psychological murder mystery written with a literary flair…Be prepared for page-turning.'
VanityFair.com
A psychological mystery with more than one poignant twist.'

Vogue.com
Lupton’s remarkable debut novel is a masterful, superlative-inspiring success that will hook readers (and keep them guessing) from page one . . . A chilling, gripping, tragic, heart-warming, life-affirming enigma of a story…The buzz is growing to Stieg Larsson volume for this accomplished literary thriller.'
Booklist starred review
A superb thriller, full of twists and turns, false leads, and a surprise ending—all seamlessly woven into a touching story of a sisterly bond that one imagines closely matches that of the talented first-time author and her own (still very much alive) sister.'
BookPage 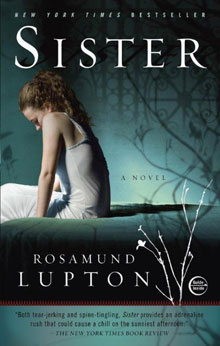